This 70-year-old grandmother rides a mountain bike, skates, skis and swims, and wishes she had more time in a day! 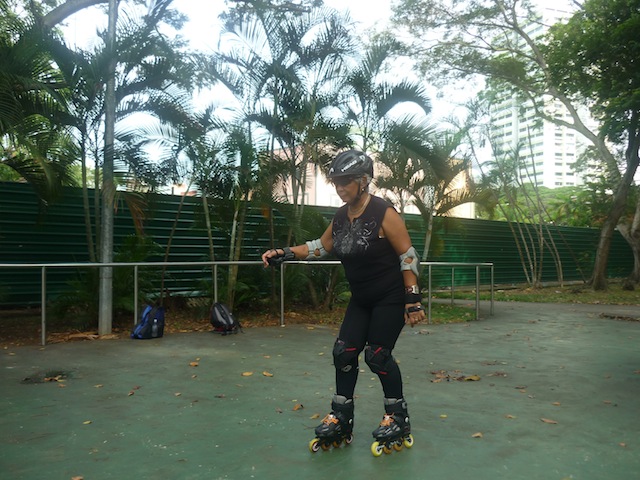 Jesudason showing off some moves on her in-line skates.

At an age when most of her peers would be happy spending a relaxing morning playing with their grandchildren or tending to their plants, 70-year-old Jessie Jesudason who is of Indian-Chinese parentage, is executing fancy moves at the skating enclosure in East Coast Park. Decked all in black and with a mean pair of sunnies shading her eyes from the early morning sun, she pirouettes and swivels on an equally mean pair of in-line skates with her friend-cum-coach Chow Ah Choy, a 65-year-old retiree.

In-line skating is just one of the many sports Jesudason excels in; the grandmother of five grandchildren from ages 10 to 22 also considers road-biking, mountain-biking, ice-skating and swimming as other sports she regularly takes part in. She in-line skates twice a week, ice-skates twice a week and goes biking on two other days.

The former youth sprinter who used to nail down an office manager position with international aviation company McDonnell Douglas shared that she is experiencing a second wind as an athlete after more than 40 years climbing the corporate ladder. “I used to be active in sports when I was younger, partly because of my sprinter background. But working life did not afford me many opportunities to exercise and keep fit, apart from hitting the gym. Now that I am retired, I want to do the things that I’ve never done!”

Jesudason decided to pick up in-line skating to strengthen her leg muscles. She had been biking regularly with a good friend after retirement, and they wanted to challenge themselves to cycle longer distances. They decided to learn skating to achieve their goal. The two friends first started off learning on their own by skating on ice and on the road. That was how Jesudason got to know Chow one day when she saw him showing off some slalom skating moves at East Coast Park.

Chow said with a laugh: “She was impressed by my moves and asked me to teach her! That was how our friendship began, and we became regular skating kakis (friends)!” The sprightly Chow is a self-taught skater, having first picked up the sport in semi-retirement in 2003.

Learnt to in-line skate at 65 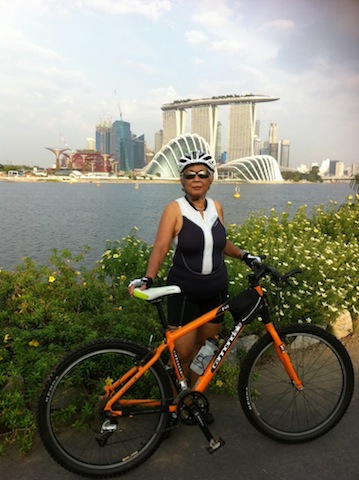 Biking on roads and terrain is one of Jesudason’s favourite activities.

Jesudason was 65 years old when she first attempted in-line skating. Her journey to learn skating was a daunting and memorable experience – characterised by one terribly bad fall. She remembered skating along East Coast Park one day when she tripped over some scattered casuarina tree seeds. The fall was so bad that she had to “walk” on her knees to the nearest lamppost in order to pick herself up.

“I fell many times while learning to skate. But that particular fall was the worst! It is already hard for a younger person to learn how to balance himself, which is critical to mastering skating. For an older person, I had to face other challenges such as taking a longer time to learn the sport and also to conquer my fear of falling.” Despite her many falls and that particularly bad one, she never once thought of giving up. From taking her first tentative steps on the in-line skates to effortlessly clocking up a 3km shift skating from East Coast Park to Fort Road and back, Jesudason has come a long way. 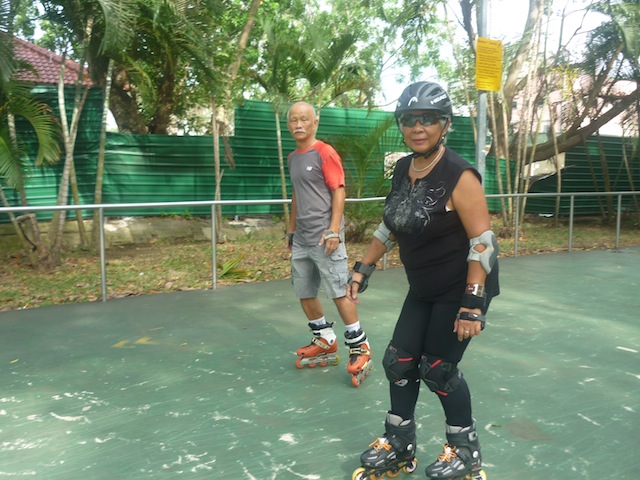 “It is not easy for someone of Jessie’s age to pick up skating. I am very proud of her. For other seniors who wish to follow Jessie and learn in-line skating, I would advise them to find themselves a certified coach,” said Chow.

Another person proud of Jesudason is her 22-year-old grandson, Ryan Matthew Pereira. “I don’t do the sports my granny does. Hence, I find it fantastic that granny is pushing herself to stay active through sports. The sporting activities keep her occupied and healthy, as opposed to her staying at home and doing nothing,” said Pereira, a national serviceman. 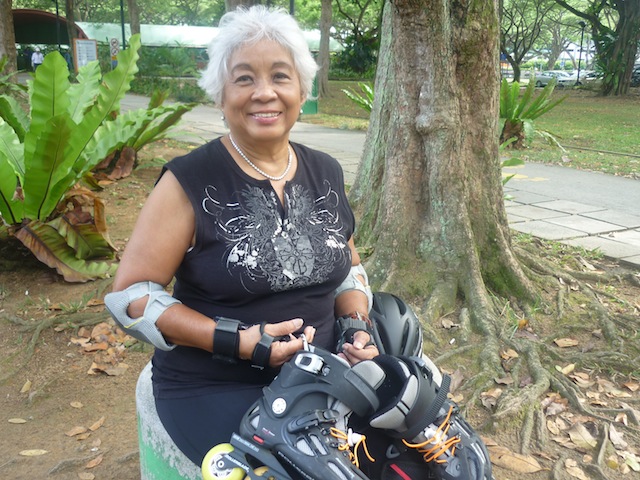 Jesudason looking mean and raring to go – on her in-line skates.

Seven days a week, 24-hours a day may seem a lot for someone who is in her golden years and enjoying retirement. For Jesudason, time is never enough! She thinks a typical day for her passes too fast – that she does not even know what she does. Her mornings are filled with sporting activities, and if you think that she will just lay low in the afternoons for a well-deserved rest from all her sporting exertions, think again! She reads, goes online (“a lot”, she said) and bakes cakes such as sugee cakes for her ex-clients.

To all seniors, Jesudason has this to say: “Stay healthy by exercising, and stay connected with friends, especially the younger ones, by joining in or organising activities that attract them.”

Is 70 the new 17? Jesudason is one granny who is epitomising the “golden” in the phrase “golden years”. Growing old has never been so sexy.