There’s something about Mary

This grandma can definitely get you off your chair and show you a good time with her electric guitar. 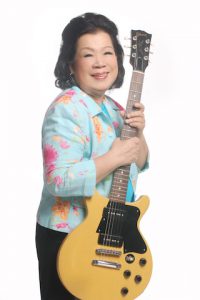 Learning to play the acoustic guitar without a musical background when you are 60-something is adventurous, to say the least. If you go on to play the lead electric guitar and perform live, it is no mean feat indeed. In fact, it’s pretty darn cool. Mary Ho (left), 76, and grandmother of seven, has done just that. Inspired by guitar legends Carlos Santana and BB King, she picked up the guitar and learned how to play from scratch. Determined to learn Santana’s ‘Samba Pa Ti’, she spent years searching for a guitar coach who was willing to help her and after hours and hours of practice, she mastered the piece.

Now, with three million hits on YouTube under her belt (so far), public performances (and more invitations pending) and her own album, Ho is certainly one rocking grandma. To add to her repertoire, she also dances – ballroom, latin, and rock ‘n’ roll.

In between her myriad of activities, Agelessonline catches up with Ho or what most people call her adoringly “Grandma Mary”:

What motivated you to learn the guitar? Why not the piano or some other instrument?

I grew up with music. In the old days, we didn’t have that much entertainment like TV and the Internet. But we had music. My father played the piano and the violin, and my mom sang Chinese opera. That is how our family spent time together and bonded.

My first love has always been the guitar. I’ve loved the sound of the guitar since I was young. My mother said that the guitar was for boys and to concentrate on my studies instead. So I never had a guitar. My friends, especially the boys, had guitars. So I bought a harmonica instead. It was inexpensive and easy to learn.

Later, I started work as a clerical typist and then got married, so I was busy raising my family. My two daughters also grew up with music. They both started learning classical piano at the ages of four and five, and by the time they were teenagers, they received their licentiat and fellowship diplomas from the Royal as well as Trinity Schools of Music respectively. My proudest moment was when both of them won the Senior and Open Categories in the school music competition respectively in the same year.

When my grandchildren were born, I spent most of time looking after them. It was only when they were older that I had more time on my hands and I finally bought my first guitar. 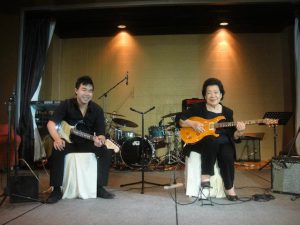 By that time you were already in your 60s. Was it tough learning an instrument from scratch at this age?

Learning is good, no matter what age. My motto is that “it’s never too late to learn”.

I bought a basic guitar instructional book and started learning how to strum. That was simple enough, but to progress, I realised I needed a teacher. I wanted a female teacher and could only find one. She managed to teach me the basics, but she was a classical and flamenco guitarist. I wanted to learn rock. A friend then gave me a Carlos Santana CD and I fell in love with ‘Sampa Pa Ti’. I was determined to learn how to play it. I started searching for an instructor, but no one wanted to take me on as a student because I don’t have a musical background and cannot read notes or tablatures. Further, at my age, my fingers are not as nimble. And ‘Sampa Pa Ti’ is not an easy piece to play!

It literally took me years to find an instructor who would teach me the electric lead guitar. I finally found one who suggested that it would be a better idea for me to play Gospel, rather than rock. In fact, he said I was too ambitious! So it was with much cajoling before he was willing to take me under his wing. I practised for hours until my fingers bled. There were not shortcuts, just plenty of hard work. You must have the determination, the patience and the passion to enjoy what you love to do.

I finally mastered ‘Sampa Pa Ti’ and after that, it just got easier and easier. Now, I’ve learnt around 40 songs – mostly rock.

How has music made a difference to your life?

Because of music, I’ve been connected to thousands of people around the world who are now my friends and fans. And this has given me a great sense of fulfilment. My grandson posted clips of me playing on YouTube and I’ve had so many encouraging comments from people all over the world. I also perform at charity concerts to raise funds for the less fortunate, which is fantastic because I can make a difference with what I love doing. 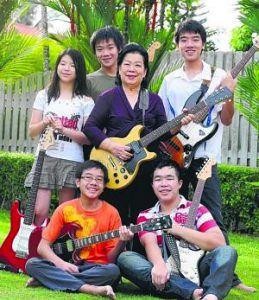 Grandma Mary and her grandchildren.

Does playing a musical instrument draw you closer to your children and grandchildren? Do you jam with them?

Absolutely. My grandchildren were impressed with what I had accomplished and wanted to learn the guitar too, so I taught them what I could. They actually said they were very inspired and wanted to be like me when they grew up, which was really sweet of them. But my advice to them was to learn an instrument that they liked, not what I liked. Aside from the guitar, they have taken up different instruments, like the drums, violin, piano, bass and keyboards. And some of the best family bonding times have been jamming together with my grandchildren, especially during the school holidays. It’s usually a huge jamming session with singing and some dancing with the family. It is such a blast.

Playing the guitar has definitely brought us closer together and it’s great that we share the same interest – music.

Unfortunately, nothing is forever. My grandchildren are now in colleges and universities overseas, and I miss them terribly. But I have so many hobbies that I am kept very busy. And my wonderful guitar keeps me company and gives me plenty of enjoyment.

What else do you do to stay active?

I love dancing, especially Latin dance, ballroom and rock ‘n’ roll. Last year, I was invited to a World Pro-Am Showcase in Hong Kong and I partnered Michael Petr (a professional dancer, who has appeared on “Dancing with the Stars” and “So You Think You Can Dance”). The audience loved it … it was simply amazing and we all had a fantastic time.

I also love travelling. Now that my grandchildren are overseas, I try and visit them during their breaks. 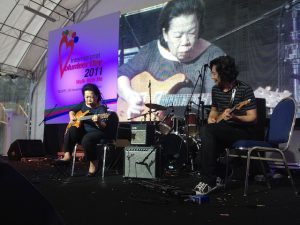 What is your next challenge?

Hunan TV has invited me to China to perform. So my next challenge is to learn Chinese songs and pick up Mandarin.

I love the blues and so far I have only learnt one piece. So my goal is to learn more blues pieces.

Advice to the young at heart – how does one live one’s life to the fullest?

You’ve got to love what you’re doing and continue doing what you love. Age does not matter. We are too young to grow old and it’s never too late to learn anything. I’m still learning a very beautiful guitar solo piece of music and have many more in mind.

Join clubs and associations of your own choice and make plenty of friends. Friends are very important. We learn from one another and we need one another. This way, you will never be lonely. Happiness is where your heart is. Love yourself and love people, and most importantly, exercise and keep well and healthy.

** Grandma Mary has a website here. She currently has her own CD called ‘Grandma Mary’s Latin Rock’ with her favourite song – ‘Sampa Pa Ti’ in it.