A programme that started in January this year at Tampines is allowing seniors to bond with each other and give them meaning.

When 66-year-old Ngau Boon Tam walked past the Tampines North Community Centre (CC), she saw a lot of people in the Wellness Room. “I got curious and I decided to find out more.”

What the mother of two stumbled upon was a community gathering that started in January this year called Silver Friends, where about 30 seniors (and growing) over the age of 50 gather twice a week for a structured programme. The centre is open on the other days as well, so the seniors can hang out with each other. 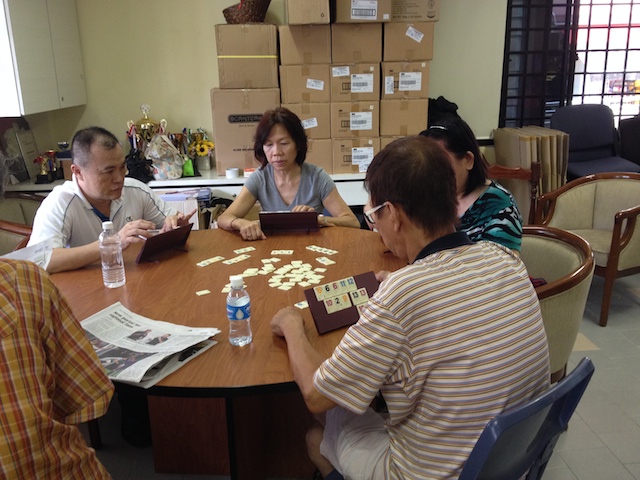 A much-loved activity – the game of Rummy-O – being played by members of Silver Friends.

The structured programme, which starts from 8.30am to 12.30pm, begins with 35 minutes of exercise followed by a 30-minute sing-a-along. After which, the seniors play games like Rummy-O, their favourite game, or attend workshops.

Said Patrick Oh, project director of a VWO, En Community Services Society (ECCS), which helps with the programme, “The programme covers the three important aspects of wellness – physical, mental and social. There is a need for this as seniors want something to do to pass their time.”

Said Oh, “This is different from the Senior Activity Centres (SACs) as they serve mainly targeted HDB blocks.” There is also a separate session during the same timing for wheelchair-bound seniors where they can do simple exercises together and the 10 of them will later join the others in the games and workshops.

The workshops, which happen every two months once, has included activities like soap and lantern making, cartoon drawing, and 3D card making. Also, they try to have an outing every two months. Some places they have gone to include Gardens by the Bay, Sungei Buloh and factory visits. According to Oh, the transport and part of the cost are funded through Tampines North CC under the Active Ageing Council.

Ngau added that after the second time participating in the programme, she found “it was quite good for me”. She laughed as coming to Silver Friends, she is busier than ever – “now my children have to make an appointment with me!”

She shared that not only is she more active these days, but thanks to the programme and hanging out everyday, she has met a lot of people and is enjoying the exercises – “I also look younger”. The mother of two said that she has pleaded with her MP not to close down the programme. “If I didn’t come here, I would be walking around, watching TV or listening to the radio – there is not much meaning in that. I looked like I wanted to die before but now, I have a lot of energy!” 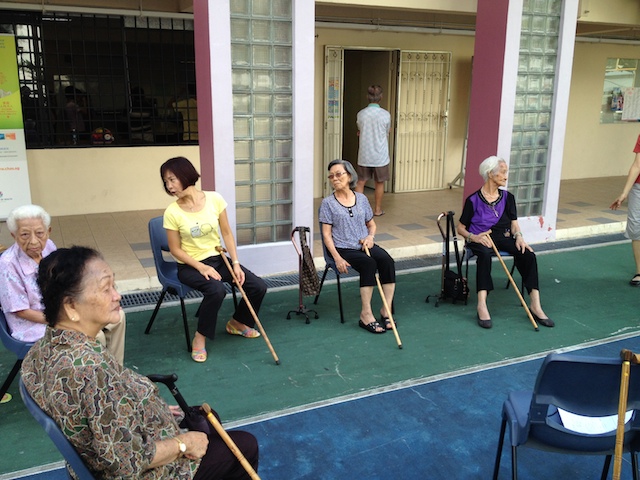 Ngau isn’t the only who has come to appreciate Silver Friends and the programme. Fifty-four-year-old Jenny Tan also walked past one day in January and a friend who is a participant invited her to join. Before joining, the mother of one was hopeless as she shared she had breast cancer and wanted to kill herself.

“Coming here, I don’t have to think about negative thoughts and I have hope,” said Tan, who shared her husband who is a taxi driver has asthma and high blood pressure, and her daughter is studying at a polytechnic. Her cancer is also in control now. “I can’t get a steady job as sometimes my family needs me around. Coming here, I have found meaning.”

She also volunteers with the programme, helping seniors to fill out forms during excursions, etc. The programme has allowed Tan to try exercising, which she never did before. “My shoulder area was very tense before. With exercising, it has loosened up.”

As there is no funding for ECSS for this programme, the organisation keeps operational costs to the minimum with staff costs being the bulk of the programme costs. “As the seniors are mainly unemployed and have little allowances, we do not have any membership cost. However, some of the workshops and outings, the seniors will have to pay a very small minimum sum,” explained Oh.

The Silver Friends’ programme isn’t relegated to the seniors. Earlier this year, Oh and his staff brought together the seniors with students from Xiling Primary School and encouraged the students to come to the centre. Together with the seniors, they then went to the Happy Lodge Elderly home, opposite of Tampines North CC.

The students were taught by seniors at Silver Friends on how to make flowers using panda leaves, and use them as gifts to the seniors at the home. “Not only are seniors helping with seniors, but there is intergenerational bonding going on and the children get to understand seniors better,”said Oh. 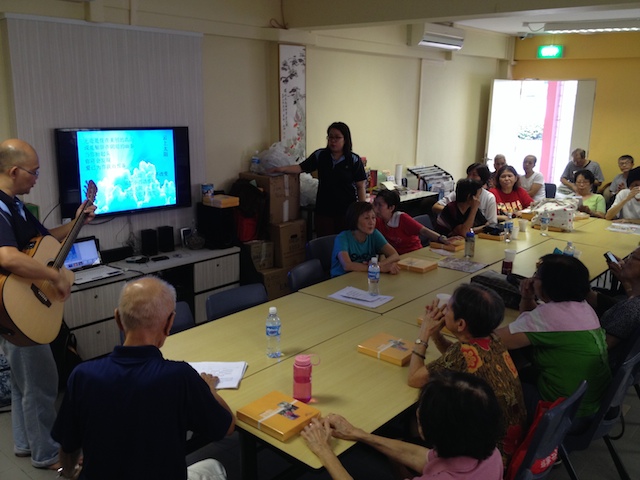 The programme’s seniors look forward to coming to the centre. Wendy Liu, 61, has been coming to the centre for six months. The mother of three and grandmother of four noted: “There is no point sitting at home. It can get very lonely”. She had applied for a job and is waiting for an answer. “I like to make new friends and coming here has made that happen.”

She doesn’t just join the structured programme; like many of the seniors, she comes to the centre everyday except for the weekends when it is closed. Seniors like Liu see the importance of an active social life as those close and personal connections will last her throughout her golden years.