From a smart diaper to brain health supplements, there were lots of solutions at Aging 2.0 Singapore, but it was a rehab wearable solutions company that won. 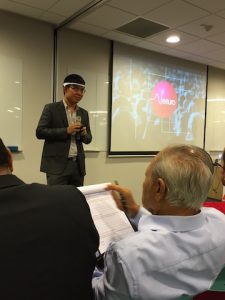 Kelly Choo, co-founder and chief marketing officer, Neeuro, showing off the contraption on the head which can assess cognitive decline using gamification.

Innovation by start-ups was certainly abound at the Hangar by the NUS Enterprise, National University of Singapore (NUS). Some were mature local start-ups while others were still trying to find their footing. There was a smart diaper with a sensor outside that could detect orientation and rotation, as well as the amount of wetness especially in the effort to prevent bedsores and skin infections.

There was a mat with sensors that goes under a mattress that can detect heartbeat and breathing, and collect data on sleep patterns for analysis, which is particularly ideal for seniors having sleep apnoea. There were also solutions dealing with dementia include a contraption on the head that can assess cognitive decline using gamification, and brain health supplements to help delay the brain from ageing.

There were also solutions that looked at the care and social aspects of seniors including home care services and a virtual retirement village with a wide range of services including concierge and retail. These were just some of the eight ideas that were judged during the Aging 2.0 Singapore start-up event in late June, organised by social enterprise market consultancy Ageing Asia, but it was Kinexcs, which builds wearable rehabilitation solutions, that took the top spot. 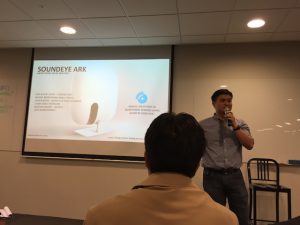 Shared Abhishek Agrawal, founder of Kinexcs, “Aging 2.0 Singapore saw participation from some really mature local start-ups who had a good mix of hardware, software and services-related business models. After I witnessed all the presentations, I was pretty sure that I stood no chance of winning the event. However, I was pleasantly surprised when my company’s name was called out. I hope I can do justice to the opportunity given to my company.”

He added that his company, which started in May 2015, was borne out of interactions with clinicians from different local hospitals over a period of one year. “During these interactions, I noticed one common theme, i.e. clinicians wanting to engage the patient in the care delivery ecosystem but were unable to do so due to the lack of a proper technology platform that seamlessly integrated with the current state-of-the-art.”

He also noticed another gap – “Many of the techniques that are currently practiced for rehabilitation are based on visual inspection and inferential feedback of the patients themselves. Hence, we came up with an idea to innovate in the rehab tech space, consisting of both inpatient and outpatient solutions.” 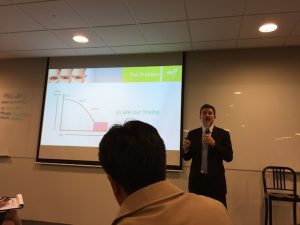 Kinexcs’ flagship product is the Compliance Monitor, which adds monitoring capabilities to traditional foot and ankle braces, enabling physicians to gain better insight into patients’ recovery patterns, and ensure compliance. The smart module contains motion and capacitive sensors that turn raw data into clinically relevant information. Abhishek explained further, “For instance, compliance in monthly, daily and hourly resolution, biomechanics of motion and gait, etc. This data can then be accessed and seen using a mobile, Web or desktop application by the clinician attending to the patient.”

The company is currently working towards applying this technology to the joint rehabilitation market for joint angle measurement and gait analysis. He shared that it will be tested in patients who have gone through knee replacement surgery.

The company has already gotten numerous local and international support, as well as funding. Abhishek said they are currently in talks with the Singapore General Hospital, Changi General Hospital and Tan Tock Seng Hospital to pilot its products. Internationally, they have also received interest from Kaiser Permanente Hospital group in the US and are currently discussing the protocols for pilot trials.

In terms of funding, Kinexcs has received the Multidisciplinary Team (MDT) Project Grant (2015-2016) by the National Research Foundation locally and is in the process of applying for the Capability Development Grant (CDG) by SPRING Singapore. The company already has received several cash awards such as the Most Tech-Driven Startup by ideasinc’s accelerator programme, the best start-up in the Geriatrics category in the A*Star IoT Hackthon, etc.

Abhishek said that in the next five years, they are eyeing the global marketplace and has plans to expand their presence in markets such as North America (US and Canada) and Europe (Germany, France and UK), besides a strong presence in Asia (Singapore, Hong Kong and Japan). He also sees an expansion of their range of products to encompass two major fields in the orthopaedic medical devices industry – the post-surgical rehabilitation market, and braces, supports and prosthetics market. 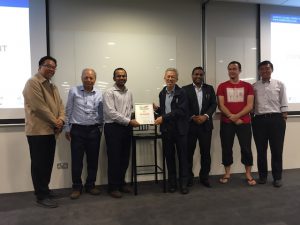 Abhishek Agrawal, founder of Kinexcs, with the judges of Aging 2.0 Singapore.

Off to judged globally

In choosing Kinexcs as the winner, there were a few things the judges at Aging 2.0 Singapore kept in mind. Prof Wong Poh Kam, director, NUS Entrepreneurship Centre, and one of the judges of Aging 2.0 Singapore, added that the judges looked at commercial viability and the idea had to be “something that can represent Singapore to the world” and hence, innovative.

Kinexcs now goes on to compete with other selected start-ups on ageing in 38 other countries and cities (including Japan, Taiwan, China, India, Italy, US, Spain, Germany, UK, Brazil and Canada) through online voting and expert judging which will end in August and, if selected, the company heads to the finals of Ageing 2.0 in San Francisco in October. If Kinexcs wins, they get bragging rights and US$2,500.

As the winner in Singapore, Kinexcs receives mentoring from the CEO of Napier Healthcare Solutions, Tirupathi Karthik, who was also one of the Aging 2.0 Singapore judges. He will prepare the company on its proposal before submission onto the global platform. If Kinexcs is selected to showcase in San Francisco, a second round of mentoring will then occur.

** The voting for all the local pitch winners is now available till August 19, 2016. To vote for the Singapore pitch winner,  click here http://bit.ly/2aaHyjI. Ageing Asia is also leading a delegation to visit San Francisco from October 10 to 13, 2016 to gain insights on technology and operational innovations on delivering healthcare and eldercare. For more info, contact Ageing Asia at marketing@ageingasia.com or call 6441 0474.