An initiative by Lien Foundation and Khoo Teck Puat Hospital to help the public understand those with dementia. 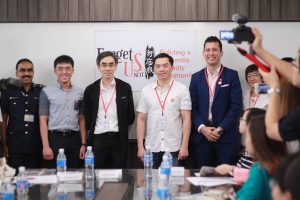 Launch of the Forget Us Not initiative – centre is Dr Philip Yap, director of KTPH’s Geriatric Centre with Lee Poh Wah, CEO of Lien Foundation.

With the rise of persons with dementia (PWDs) in Singapore, Lien Foundation and Khoo Teck Puat Hospital (KTPH) has been fostering in Yishun a community that understands, embraces and supports PWDs and their careers. To help to do this even further, they have launched an initiative called Forget Us Not, where they are inviting those in Yishun and beyond to respect, value and support PWDs.

This multi-prong effort comprises of music videos, a short film, social media video experiments, handy guides and getais to draw public support for dementia sufferers. Said Lien Foundation’s CEO Lee Poh Wah, “Because of its prevalence and high cost to society, we need to make dementia-friendly communities the ‘new normal’ in Singapore, starting with Yishun – which has an elderly population and established network of support from KTPH.” In Yishun, there are 201,970 residents with 9.6 percent who are 65 years and above, and 1.7 percent who are 80 years and above.

Lee added: “Often, persons with dementia get stigmatised. The shame associated with dementia is exacerbated when people do not understand its symptoms and react poorly towards dementia sufferers. As dementia touches a wide spectrum of society, we need to encourage early diagnosis and candid conversations on this issue, so we can move from isolation and institutionalisation, to inclusion.”

This is not something new as other countries have already been putting in place dementia-friendly initiatives. In Japan, there is a volunteer initiative called Dementia Friends, which got started in 2005. The network has six million and it hopes to have eight million by 2025. UK has mirrored this initiative in 2013 and last year, it has one million Dementia Friends across England and Wales. In the US, there is a Dementia Friendly America Initiative, which was announced last year and drew participation from more than 50 national organisations seeking to make dementia-friendly communities across the US.

In Singapore, today, over 6,000 people and businesses have participated in educational talks on dementia and training sessions held by KTPH in the last six months. They come from Yishun and other parts of Singapore, and represent all walks of life and society, from local businesses to MNCs – like North Point Shopping Centre, Capitol Optical and McDonald’s; students from the National University of Singapore and Nanyang Polytechnic; and religious organisations like Evangel Family Church and Darul Makmur Mosque. Also to come on board are organisations such as Sheng Siong Supermarket, the National Library Board and People’s Association.

Dr Philip Yap, director of KTPH’s Geriatric Centre, said, “With everyone chipping in, we hope Yishun will be a place where PWDs feel included, respected and valued. Here, they can get around safely and continue to participate meaningfully in their usual routines because members of their community, be it a favourite neighbour, shopkeeper or local policeman, can understand and assist them. Having such community support is a boost for PWDs and their families. It can help PWDs age-in-place and continue to stay plugged into society.”

To assist the public, PWDs and their carers, staff from the call-centre of KTPH and the new Yishun Community Hospital, as well as security personnel, have undergone training in dementia. Other frontline staff such as those located in public-facing areas of the hospital will also be trained progressively. The Lien Foundation and KTPH hope the awareness and vibrant network of community support found in Yishun will inspire other estates in Singapore to become dementia-friendly too.

Also, the Yishun North Neighbourhood Police Centre has played a key role in supporting the Forget Us Not initiative through their community network. Over 80 Yishun residents who are part of the estate’s Citizens-on-Patrol have been trained to detect, respond and assist should they meet PWDs during the patrols. Bernard John, vice-chairman and leader of the Citizens-on-Patrol for Chong Pang Zone 8 RC, said, “With the training, we are now better prepared when we meet persons with dementia or the elderly who may be in distress. We hope that as the public becomes more aware and understanding towards persons with dementia, they can be part of our support network in Yishun and the larger community.” 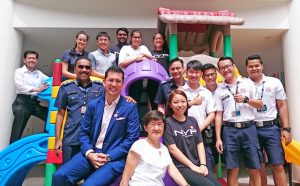 Individuals and organisations who have signed up as Dementia Friends and dementia-friendly organisations, including NYP and the Singapore Police Force.

The initiative is also reaching out to train more organisations to become dementia-friendly entities and interested parties can e-mail to info@forgetusnot.sg for more details. Staff of these businesses or organisations will receive training on dementia from KTPH. As a sign of their commitment and support, a “Dementia-Friendly” decal will be provided for them to display on their premises.

The training on dementia has paid off for staff of McDonald’s Singapore. Fadzli Hussen, director, Government Relations, said, “We are now more knowledgeable about persons with dementia and their issues and concerns. This means we are in better position to respond with more understanding, care and respect. We now also know which parties to contact if we need additional help.”

After attending KTPH’s dementia training, some 30 Nanyang Polytechnic students took to the streets of Yishun to conduct a survey on 30 shops and businesses. They found that 80 percent of those surveyed were open to learning more about dementia and would consider being a dementia-friendly organisation. Besides Yishun, these students have planned to expand their outreach to Ang Mo Kio, and recruit more Dementia Friends.

The Little Red Ants Creative Studio has also produced a five-minute film on what a dementia-friendly community is like. Trailers introducing the film will be shown in Golden Village, Yishun, during the Chinese New Year period. In addition, Singapore concert production company Livehouse has created a music video where PWDs from KTPH and two nursing homes participated in a heartwarming rendition of popular Chinese evergreen. The video can be seen on the Forget Us Not website.

Further outreach for Forget Us Not will be through the press, bus-stop ads, videos of social experiments to uncover good Samaritans by The Hidden Good, social media humour by SGAG (the local version of international 9GAG humour site), and celebrities’ roadshows in Yishun to recruit more Dementia Friends. Residents in Yishun can look forward to two getais to be held in March in their estate.